We have received the sad news that crane and aerial lift sales manager Craig Anderson has died, he was just 70.

Craig Anderson worked for Grove Manufacturing company in the 1970s and 1980s, he joined the company in 1975 as a sales/management trainee working in the marketing department at the company headquarters in Shady Grove Pennsylvania. In 1977, following a brief marriage to Lisa, he was appointed as district manager for the Central region, based in Memphis, Tennessee. A critically important territory which included Louisiana and one of the manufacturers most important distributors – Head & Engquist – now H&E.


In 1980, having requested an overseas posting, he was appointed as district manager for Scandinavia, based at the Grove International offices in Oxford. It was a job he absolutely loved, travelling internationally, learning new customs and meeting new people. He quickly built a strong rapport with his dealers and customers and developed a love for the Nordic people and their way of life. It was with great reluctance that he finally accepted a move back to company headquarters in Shady Grove in a marketing role in 1985. He left the company a year later to work with Mark Industries as North East sales manager. In 1998 he joined JLG as South East regional sales manager, becoming Top Salesman for fiscal 1991. In 1992 he moved to a similar role as Snorkel where he pioneered the use of laptop computers by the sales force. In 1996 he joined a small group in Pennsylvania that launched Zefer Operations to develop the patented all-electric Zefer Lift scissor lift range – totally free of hydraulics, but it was way ahead of its time and never really got off the ground.


After short spell with aggregates equipment manufacturer Mellott Enterprises as product support manager, leaving the crane and access market in 2001, to move back to his home region of New England and Cape Cod, in order to be closer to his aging parents. He became a realtor with Cotton Real Estate which was purchased by Sotheby's International Realty and he did reasonably well, but at the same time became a professional real estate photographer – having been a keen amateur for most of his life, and an avid crane photographer during his Grove days and of aerial work platforms at Mark.

His mother passed away a few years back and his father followed just over a year ago, he is survived by his brother Glenn. We understand that he suffered a stroke in June and never really recovered, passing away on November 7th. Sadly we have only just received the news.


Craig Anderson loved life, people and, since returning to New England, his dogs - particularly Newfoundlands. He was perhaps not the luckiest in his personal life but did pretty well, always managing an excellent standard of living and time to enjoy his passions of meeting with friends, his dogs, photography and his music. His premature passing will be keenly felt by all who knew him, even those that might not have seen him in more than 30 years.

Paul Richards
Craig and I were great friends in the Grove days and holidayed together a few times afterwards. More recently would exchange the occasional e-mail and card and plan a visit one way or the other - so sad that isn't now going to happen. A lesson learned - carpe diem.
RIP my old friend.

Will
Greatly saddened to read this, worked with Craig back in the Oxford days of Grove and we keeping in touch from time to time over the years. Rest in peace Craig. Bill Green

Manitowoc - “tariffs may not be the best solution” 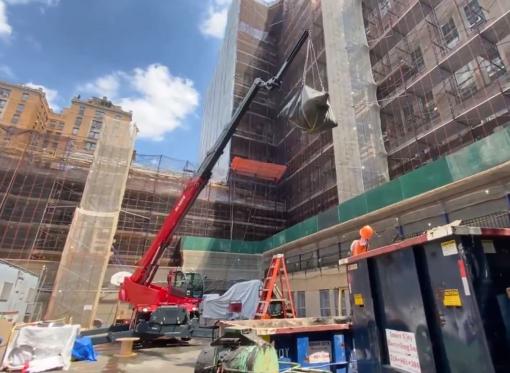 US contractor Adam’s Euro has received the first 51m/6,000kg Magni RTH 6.51 telehandler to be delivered

LGMG teams up with AMS

LGMG has teamed up with Dutch software company AMS to provide telematics on its range of aerial work platforms for the export market.

A crawler crane struck a bridge in Juneau, Alaska, last week as the barge it was on passed under